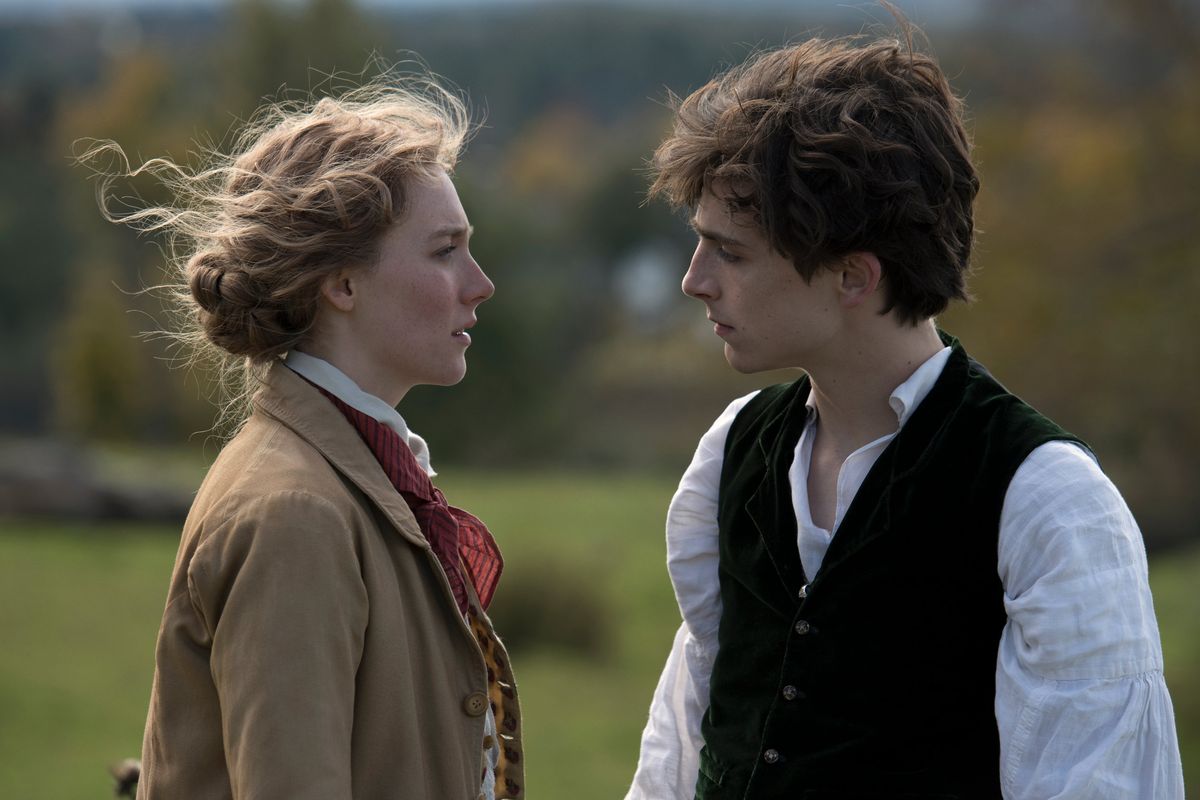 We meet Jo March in Greta Gerwig’s adaptation of Little Women defiant over her publisher Mr. Greenwood’s demands for her characters to be married by the end of her stories. This reluctance towards marriage persists as we learn more about her. She never misses a moment to mention that her fuel in life comes from her independence.

However, she arrives back to her childhood New England home sharpened much like the winter airs that greets her. She no longer possesses the cheerfulness of her youth, shown to us through intermittent flashbacks that carry the story along. Her role as the leader of the March sisters is no longer necessary, her big sister Meg content in marriage and her little sister Amy off on European adventures. We start to realize the claims of independence mask contrary intentions. Eventually, she unleashes her pent up frustrations to her always understanding mother Marmee.

Saoirse Ronan’s delivery of this pivotal scene is what frames her character’s viewpoint on love. I empathize with her fears attached to love. The concern is that a sharing of yourself with another leads to you being left with less of yourself. You have less time to pursue your passions. Your important personal connections already made, like Jo’s with her sisters, will move to the background. The worry is that accepting another as a part of you results in an entire shift in your identity.

However, that stance can be a dangerous one to keep. Self-acceptance can quickly turn into complacency. Jo finds her herself in this spot. She is reluctant to challenge herself in her writing. Her educator counterpart Friedrich offers the potential at an equitable partnership based on honesty, but quickly pulls back from the leap necessary to embrace new truths.

She walked herself off that ledge before at the culmination of her transition from childhood to adulthood. The autumnal leaves of change surround her and her childhood friend Laurie. Her sisters have accepted the change ahead. Meg has married. Amy has accepted her aunt’s offer of an artistic apprenticeship in Europe. But when Laurie admits his love for Jo and her leap of faith into unknown appears in front of her, she retreats into what is comfortable: her understanding of who she is without love.

Now Jo faces a future of loneliness, unless she accepts that a past layer of herself must be shed and a new version of her well-defined personality adopted. We as humans must force ourselves out of the rigidity of old ways to allow for opportunities at growth. In these regards, Jo is no longer mentor but mentee to her younger sister Amy.

Amy, played expertly by Florence Pugh, put herself through this cycle of growth. She transforms in the film from fussy and petulant child to steadfast and determined adult. She has worked hard not only at her painting, but in understanding what she wants from life. While Jo prides herself on self-discovery, Amy has discovered herself through her relationships. As she paints her forever love and soon to be husband Laurie, she reveals her mantra towards love.

“I believe we have some power over who we love, it isn’t something that just happens to a person.”

Love needs to be grabbed when you see a chance at it. It isn’t something that serendipitously falls upon us. A successful partnership requires the diligence to work towards common goals, without the suffering of individual identity. We cannot reach understanding alone, as we often are unaware of our blind spots. A true partner can help us reach greater truths about ourselves and give us the fire to push our passions to new heights.

When Friedrich took life into his own hands and finds himself face to face with Jo and the entire March family. Now, Jo must heed Amy’s lesson on determination. A new adventure awaits in a train to California with Friedrich on it. It will not require a sacrifice of who she is, but an admittance there is still much more to become.

So here’s to those of us who are love-hesitant chasing that train in the new year and taking the chance at betting understanding ourselves through the love we can give others.